Banned for RWI, someone help me 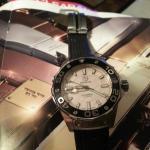 By Wirosableng,
November 2, 2015 in General Discussion

Top Posters In This Topic

Curiously, the handwriting on your "brother's" dial tagged pic looks a lot like (what should've been) yours on that 569 sale thread back in late September. Or was it your brother...? Seriously dude...

Well that was an interesting read! Loved the ending. Better not let my dog near my laptop, he'd be posting in the sales section for sure! Here's my Doberman :-)